We Sell and Move Shuffleboard Tables all over East Texas

In Table Top Shuffleboard, players take turns sliding weighted pucks down a long, smooth table usually made of wood. Both ends of the table are marked with specific areas for scoring

Get A Free Quote

The Table custom made for Shuffleboard Play

The official shuffleboard table length is twenty-two feet long by twenty inches wide, although unofficially, sizes can be as short as nine feet and almost any width. Shuffleboard table markings are located at each end of the table, while roughly one third is covered by three scoring areas. Each scoring area covers the width of the table, although they can vary in length. The area closest to the end of the table is marked with a “3,” meaning three points, roughly four to five inches in length. Equal in length is the adjacent scoring area, marked with a “2” for two points. Next to this is the “1” section, for one point. This section is roughly four times as long as either of the other two sections. The lines that separate the center of the table from scoring areas is called the “foul line.” A shot must pass the foul line or be removed from play. Surrounding the table is a gutter called the “alley.” Pucks that fall or get knocked into the alley are out of play for that round. 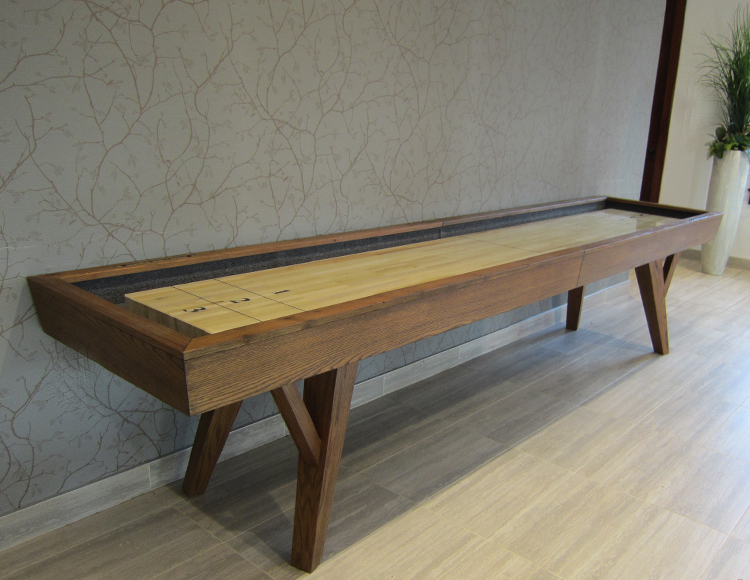 Shuffleboard Powder for a Smooth Slide

To keep the pucks sliding smooth, you should use a product made called “shuffleboard powder.” Shuffleboard powder enables the puck to ghost smoothly across the board. The silicone beads are tiny ball bearings, allowing a puck to slide down the table with minimal effort. Historically made from cornmeal or sawdust, the new Shuffleboard dust is superior.

Shuffleboard originated in England around the 1400s. At that time, players would play a game called “Shoffe-Groat,” sliding a large 4-pence coin, called a “groat,” down a long table with points scored for getting the coin close to the edge of the table without falling off.

Shuffleboard was popular with early American colonists. Arthur Miller gave Shuffleboard its first literary mention in his 1692 play The Crucible with the following line: “In 1692, there was a good supply of ne’er-do-wells who dallied at the shuffleboard in Bridget Bishop’s Tavern.” This also marks the first recorded mention of Shuffleboard in the New World!

During the nineteenth century, Shuffleboard was a competitive sport, particularly in New York City; newspapers reported the results along with baseball, boxing, and other sports.

During the 1950s, Shuffleboard as a sport was very popular. Tournaments were nationwide, often sponsored by shuffleboard manufacturers. Then in the 1980s, Shuffleboard Tables became more commonplace in new luxury homes. The 1990s saw the formation of the TSA, or Table Shuffleboard Association, which established a hall of fame to immortalize the sport’s very best players.

Choose who will go first and then allow the loser to go second each round. It is advantageous to go second. Players use colored pucks to indicate which team they represent. Players take turns sliding their puck down the table. The main goal is to crush your opponent like the losing sack of worthless Shuffleboard scum they are by getting the pucks as close to the end of the board as possible without falling off the end. (competition can be fierce)

When shooting, you can hit the pucks of your opponent. The idea is to try and strike your opponent’s pucks out of play by pushing them into the alley. Remain focused on the points system while moving your pucks into a higher-scoring location. Each team or player receives four pucks. When scoring at the end of the round, points are awarded only to the player whose puck is closest to the edge of the table. Your puck can only score points if it is on the table, over the foul line, and closer to the end of the table than any of your opponent’s pucks.

If you are the lucky player that slides a puck that overhangs the edge of the table, you receive four points. A puck in one of the scoring zones receives points according to its zone. A puck that is touching the line between zones receives points only from the lower zone. Two players play to fifteen, and teams play to 21 or the predecided number if remembered. 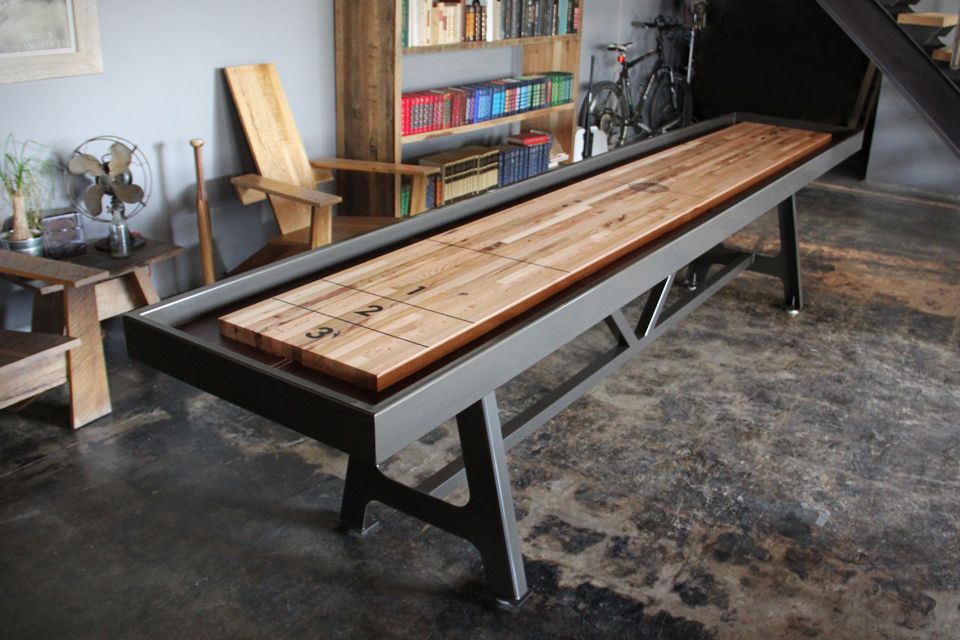 We recommend agreeing to rules before the game starts and just having fun. Remember that Big Mike’s Billiards sells and installs Shuffleboard Tables of all sizes and designs, and we also move shuffleboard tables anywhere you need them. Call us anytime for a free quote.

*Customers are seen by appointment only. Please call before coming to our office.